Electric School Buses: A Cleaner Future for Our Children 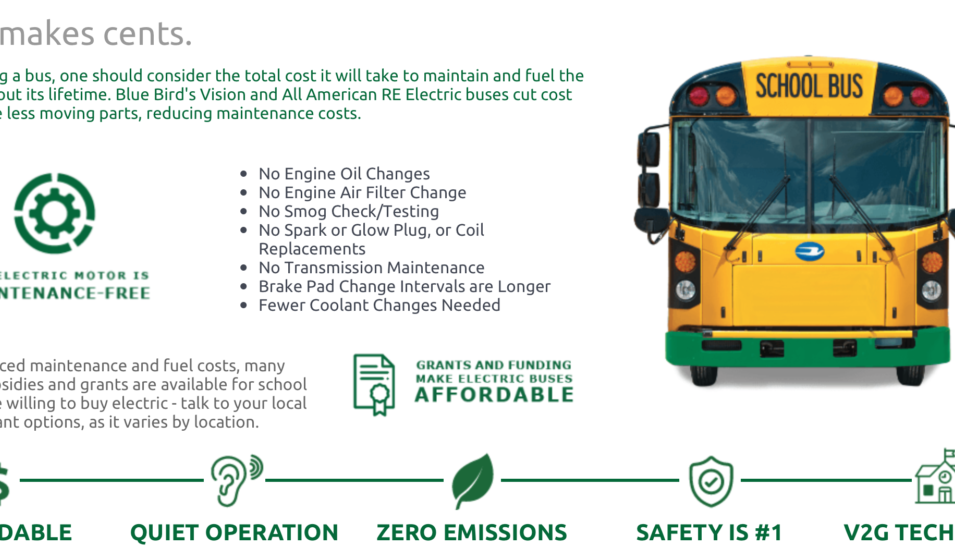 The Biden Administration has set ambitious goals to convert to an all electric fleet.

Leif Saveraid, our Washington, D.C.-based Sustainability Policy Intern, will be examining a variety of environmental policy issues that affect rural regions and communities. This is the second in Leif's series. Read his first piece on nitrates in water.

When it comes to tackling vehicle pollution, what do you think of? Probably the car sitting in the driveway. Maybe the delivery truck dropping off packages. What you may not think of is school buses. There are around 500,000 school buses carrying 26 million kids to school per day in a normal year. This makes them the largest public transportation system in the U.S. While they are more efficient at transporting people than cars, almost all of them run on polluting fossil fuels. However, recently technology advancements have cleaner electric buses a legitimate option, and these clean energy buses have started to be adopted. What are their benefits? And what is needed for rural schools to adopt them?

President Biden has reportedly set a campaign goal of making the U.S. school bus fleet zero emissions by 2030. This is an ambitious goal given the relatively small number of electric buses that are currently. However, there are good reasons to make the shift as quickly as possible. The quicker society transitions, the less climate change causing C02 will be released. Diesel buses also emit harmful pollutants like nitrogen oxides and particulate matter. These pollutants can affect the health and learning of schoolchildren, especially when they ride older buses. The EPA advises schools to reduce bus idling, because diesel exhaust can end up into the school. Noise pollution due to loud diesel engines is also a concern.

In contrast, electric buses have no tailpipe emissions. This eliminates most of the pollution concerns surrounding diesel and other fossil fuel powered buses. Even if the electricity is mostly supplied from fossil fuels, studies have shown electric vehicles to emit less C02. It also important to remember that the national electricity grid continues to get cleaner.

Electric school buses are very quiet- so quiet in fact that some are required to have noise generators so people can hear them coming! They are often more powerful than diesel buses and easier to drive. Their engine technology is relatively simple, and they require very little maintenance in comparison to fossil fuel powered buses. Between this and the reality that electricity is cheaper than diesel, electric buses are much cheaper to run. While range is often an issue for electric vehicles, most school bus routes can be easily accomplished by electric buses. The main challenge of electric buses is that they currently are around double the cost of a diesel bus. This will obviously be a challenge to cash-strapped school districts.

A number of school districts have begun incorporating electric school buses into their fleets. Rural Schools Collaborative has highlighted that the Charles City County Schools has added electric school buses to its fleet through a partnership with Dominion Energy. Partnering with an electric supplier is a common way to help schools adopt electric buses. In Colorado, Mountain Parks Electric, a rural electricity coop, helped West Grand School District finance its first electric bus. Such partnerships reduce upfront costs for our underfunded schools while providing electric coops with additional power demand and extra flexibility if vehicle-to-grid systems are installed. Electric buses can serve as an introduction for kids to electric vehicles, educating them on the actions needed to combat climate change. Some schools are starting to order larger numbers. Montgomery County in Maryland recently ordered hundreds of buses and plans to have an all-electric fleet by 2035.

As Montgomery County’s plans make clear, Biden’s 2030 goal for a zero emissions fleet is quite ambitious. Rapidly increasing the number of electric buses will require a number of actions. First and foremost, schools need help paying for electric buses. While lower maintenance and fueling costs can make them cheaper over the long term, many schools may not have the funding to pay those initial costs. Rebates or programs that spread out that cost could greatly increase the ability of school districts to purchase electric buses. Programs that help establish the chargers for the buses is likely needed as well. At a macro level, the Biden administration needs to ensure strong battery production and supply chains in order for the manufacturers to switch to solely electric. If the Biden administration is successful in advancing similar policies to these we can look forward to cleaner buses for our children and our planet in the near future.