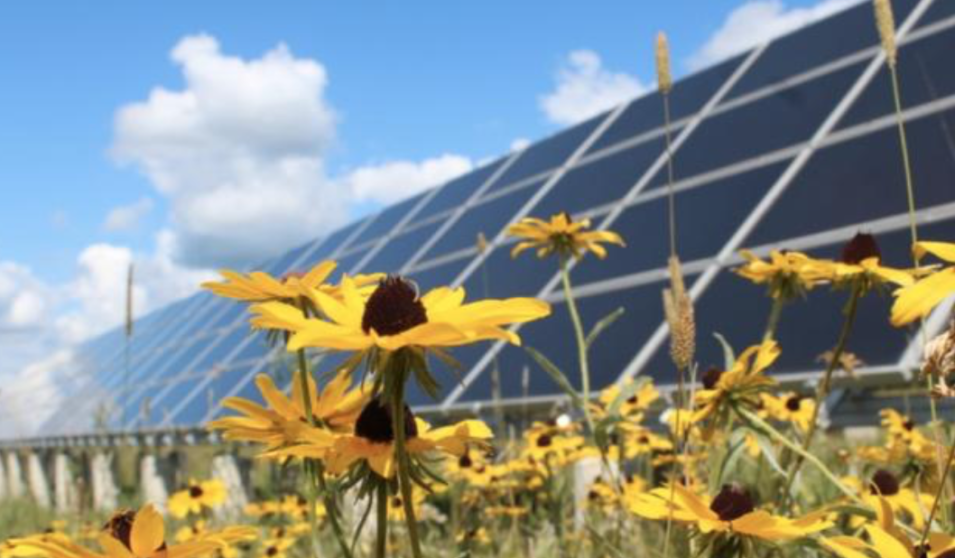 A rural school installation in Minnesota (photo from Brainerd Dispatch)

Leif Saveraid, our Washington, D.C.-based Sustainability Policy Intern, will be examining a variety of environmental policy issues that affect rural regions and communities. This update on solar schools is the third policy brief in Leif's series. Read his first piece on nitrates in water and his second piece on electric school buses.

A growing number of K-12 Schools across the U.S. have installed solar panels. They have done so because installing solar panels has the ability to address climate change, teach students, and produce significant savings on electricity cost. K-12 Schools use a substantial amount of electricity, and such costs are often among the top budget expenses. Solar panels and associated energy systems can bring other benefits as well, including resiliency in the face of climate change threats and electricity blackouts. Schools are an ideal place for communities to invest in solar because of their unique characteristics and ability to create large scale projects.

In the past decade solar power has grown rapidly as a source of energy, along with other renewables. While Solar provides only a small percentage of electricity nationwide, some 5.3 million students already attend schools with solar installations. This represents some 7,000+ schools with solar, or about 5.5% of all schools in the U.S. There are solar schools in at least 49 states. Reportedly, 29% of schools in Hawaii have solar. And it’s not just sunny southern states—both New Jersey and Massachusetts are in the top five in terms of school-based solar installations.

Unlike most other energy sources, solar can be easily installed on both a small and large scale. While there are other forms of renewable energy, in most cases they are not practical on the scale of a school. Schools often provide ideal locations for solar panels, as many school buildings have flat roofs. Additionally, solar panels can be installed above school parking lots to make use of otherwise wasted space while shading cars below. Solar can be easily paired with battery storage, which stores excess energy for times like night.

Solar can provide meaningful cost savings to schools and school districts. The Batesville school district in Arkansas installed solar in 2017 in an effort to control costs and prevent cuts to teachers’ salaries. The solar panels they installed cover around 50% of their energy needs and save about 100,000 a year. Over 20 years their savings are estimated at 2.4 million. Combined with energy and water efficiency efforts, they have reportedly. saved enough to increase teacher salaries. Meanwhile, in Arizona, the Tucson Unified School district is projected to save 43 million over 20 years due to their absolutely massive 23.8 MW solar deployment.

One common misperception is that solar installations require an upfront and costly commitment of capital. The huge Tucson project would certainly seem to suggest that. However, the Tucson project actually required little in initial costs. In many instances, like Tucson, schools use what is called a third-party power-purchase agreement. The solar panels are owned and operated by a separate company, which can take advantage of the 26% solar tax credit offered by the federal government. In exchange, the school agrees to buy the electricity generated for a certain period of time at a fixed rate that is below the normal electricity rate. Alternatively, a school can own and operate its own system by raising the money to purchase it or using debt service.

Unfortunately, not all states currently allow power-purchase agreements. Encouraging all states to legalize such agreements will help expand the feasibility of solar to more schools. Another issue is net-metering. This is where the excess power produced by solar systems is subtracted from the school’s utility bill. This is available in many states and helps solar installations reduce electricity bills even when the school is not consuming that energy. However, not all states or utilities offer net-metering, and it has become a political football in many states. Mandating net metering as an option would also increase the attractiveness of solar and provide real savings to rural schools and their respective communities.

Solar is also making inroads in the classroom. In places with installed solar systems, like Tucson Unified School district, teachers have found ways to use the energy monitoring data for hands on learning experiences. Meanwhile, Illinois has provided 96% of its schools with grants to fund the purchase of at least a solar panel. These are designed to be used as educational tools, and teachers are provided with training to incorporate the small solar systems into the classroom. The ultimate goal of the program is to expose students to solar power so that they will consider the environment when thinking about energy usage and impact.

More and more rural school communities will most likely transition to solar power as energy misinformation decreases and rural regions realize the benefits of renewable and decentralized energy systems.

Learn more about how rural schools can go solar from The Solar Foundation.

Here is an article on eight diverse public schools that went solar in 2019.