Burger is a perfect example of what the OTC aims to achieve: a student who returns to give back to the community that raised her. 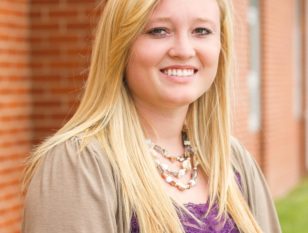 Since 2010, scores of young educators have graduated from the Ozarks Teacher Corps, with a rural school teacher-placement rate of better than 90 percent. This summer we will profile 13 of these teachers who are making a difference for rural Ozarks students and schools. These interviews were conducted and profiles written by English and Writing students at Drury University for the Rural Schools Partnership.

After speaking with Ashlee Burger, it is easy to understand why she is living the life she is. You can feel her exuberance and passion for her hometown. Burger is a perfect example of what the Ozarks Teacher Corps hopes to achieve: a student who returns home as an enthusiastic molder of young minds, to give back to the community that raised her.

Burger grew up in the town of Strafford, just north of Springfield, attending the public schools there from preschool until she graduated. She found her love for elementary education by participating in the A+ Program at her high school, tutoring in a first-grade classroom. “It was the best part of the day,” Burger says, adding that she knew from this experience that she wanted to teach early elementary education, “no higher than third grade.”

This desire, coupled with her love for Strafford, made Burger a perfect candidate for the Ozark Teacher Corps, which she heard about from another member of the community. When the time came for Burger to move beyond Drury University as an educator she did her student teaching and substituted in Strafford until she got her own kindergarten classroom at Strafford Elementary in fall 2016.

Burger admitted to being a little unsure going into her first year of teaching with “a lot of late nights,” but that she learned a lot and feels better prepared for the years to come. Burger was, of course, familiar with the role the schools plays in the Strafford community, and has had the opportunity to experience it from a new perspective in recent months. Strafford, according to Burger, is a town where “almost everybody knows everybody,” so coming back to home to teach was a good experience without a difficult transitional period. Many teachers Burger had in the past are still at their posts and are happy to help with any questions she might have.

Burger also talked about how volunteers from the community read to students and participate in Career Days, among other activities. The school depends on this kind of support from individuals and businesses in Strafford, as it is difficult to petition bigger businesses in neighboring Springfield for aid. Strafford teachers also get a considerable amount of inter-district cooperation. Since many surrounding districts only have one elementary school, teachers from smaller districts in the region get together every year for Ed Camp of Southwest Missouri to share ideas and help answer each other’s questions. This gives teachers like Burger the chance to interact with others dealing with the same challenges in the classroom; the educators help one another take them on. This is one way these districts are able to compensate for the lack of support rural schools often experience compared to larger districts.

While Burger’s first year required a time to acclimate to having her own classroom, she is excited to take more action during the years to come. Thanks in large part to her experience with the Ozarks Teacher Corps, Burger has many plans to write grants, increase community involvement, and petition other groups that help rural schools. One idea she has is to create a community garden that would bring community members and students together working toward a common goal that would benefit both the school and the community itself.

Burger also wants to petition Placeworks, a grant program through the Rural Schools Partnership that brings free interdisciplinary arts lessons into rural schools, for involvement in science and social studies classes. Efforts like Placeworks -- and teachers who utilize them -- are important to filling curriculum gaps in rural schools, where arts programs often struggle to secure funding. Without support from big businesses or government funding, more schools and teachers are finding ways to help themselves.

Burger encourages other education students with a passion and a love for their hometown, or rural schools in general, to look into the Ozarks Teacher Corps – or similar programs where they live – so they have the tools to help rural communities from the classroom.