“That’s the thing about rural schools, you have high need, but you also have people rooted in the community that want to support the kids,” 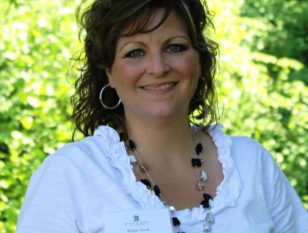 Since 2010, scores of young educators have graduated from the Ozarks Teacher Corps, with a rural school placement rate of better than 90 percent. This summer we will profile 13 of these teachers who are making a difference for rural Ozarks students and schools. These interviews were conducted and profiles written by English and Writing students at Drury University.

Despite the mass of children’s fiction in her office, Dr. Mykie Nash isn’t like the scary, looming principals in most of those books. Her office is bright and her demeanor is welcoming. It’s easy to see why young children have no problem visiting the assistant principal’s office here at Pate’s Early Childhood Center in Aurora. Dr. Nash wanted to be a teacher when she graduated high school and began her studies at 17 years old, but soon life swept her in a different direction, to marriage and children of her own. Yet when her son started first grade she started helping in the classroom, became the PTA president, and realized that school is where she belonged. Dr. Nash taught first grade for three years, spending her first at Aurora, followed by two years in Clever. However, she always had a mind to go into administration, and graduated with her Doctorate in March of 2017.

Dr. Nash lives in Clever with her husband and two children, but doesn’t mind working in a different community than she lives. While this compromise is a lot of work for Dr. Nash, she is loyal to the Aurora community, dedicated to getting to know the teachers and the kids. Living in Clever keeps her from most local weekend events, but Dr. Nash is sure not to miss a football game.

“Football is a really big part of Aurora’s culture, so everyone gets out to the games,” she says. While this is a responsibility, she looks at it as an great opportunity to connect with the greater community. Dr. Nash thinks Aurora is very welcoming to teachers and administrators that live outside of the city limits, especially those that are willing to put in that overtime.

Dr. Nash has always considered rural education to be a part of her life and her heart. A graduate of Reeds Spring, Mo., she is no stranger to the rural way. “It is what I know,” she says. When she had children, there was no doubt in her mind that she wanted to return to a small town. It was a matter of chance that Aurora was the place that she landed her first teaching and administration jobs, but she doesn’t intend to leave any time soon. Dr. Nash took over as the principal this fall and has high hopes for the remainder of her career.

“I just have never felt like my work was done here at Pate. I was drawn back by feeling like I can make a difference with the kids from this community,” she says.

Dr. Nash says she saw herself in the Ozarks Teacher Corps before she even finished up the admittance paperwork, as it fit perfectly with her passion and plan for rural educational administration. Her participation aided her immensely in her work in the classroom, helping her to understand things she was not exposed to as a student, including project-based learning and ways to become involved in the communities of the schools.

“Although I grew up in a rural school myself, I didn’t face many of the challenges they were able to open my eyes to,” Dr. Nash says. If anything, she wishes she would’ve known about the heartbreaking needs of the children. “The truth is that these kids are not on a level playing field, no matter how hard we try to make it that way, they have to go home,” she says.

On the flip side, the mobility of families in Aurora is challenging for the children and the education departments. It is hard for the school to show growth when kids are moving to and from the district frequently, which strains the social and emotional well-being of the children. Rural schools also struggle immensely to find good teachers that don’t live in these communities already, both because of better-paying districts and lack of housing. Another common struggle of rural schools is poverty, and Aurora is no exception. Dr. Nash says that she often thinks back to a little boy she met in her first year of teaching at Aurora. “The kiddo could not come up with two dollars for his field trip to the pumpkin patch,” she says. This was shocking and she realized that while she is trying to teach these kids math, they are often grappling with much bigger life problems at home.

At the end of the day, Dr. Nash loves to work in Aurora. She says when she came back here, “I felt [at] home … the feeling of family and community [is] in the building.” Much of this feeling of community, she notes, is driven by the administration. The principal that recently transitioned out of Pate spent a great deal of time laying the foundation within the school. The town is very proud of the school and the children that can make it to graduation.

“Community support is huge in Aurora,” she says. Twice this year, community members have come in and paid off all outstanding lunch bills in Aurora, up to $1,100. “That’s the thing about rural schools, you have that high need, but you also have these people that are rooted in the community that want to support these kids,” Dr. Nash says.

Dr. Nash is driven in this field, but there is more work left than she can do alone; Aurora is looking for more excellent, experienced teachers. Dr. Nash wants young teachers to know that rural education can be emotionally heavy, but it is worth it. After all her hard work and extensive education, she says, “Now I put my boots on and try to help the community and children to give them what they need.”