Rethinking school consolidation and other musings 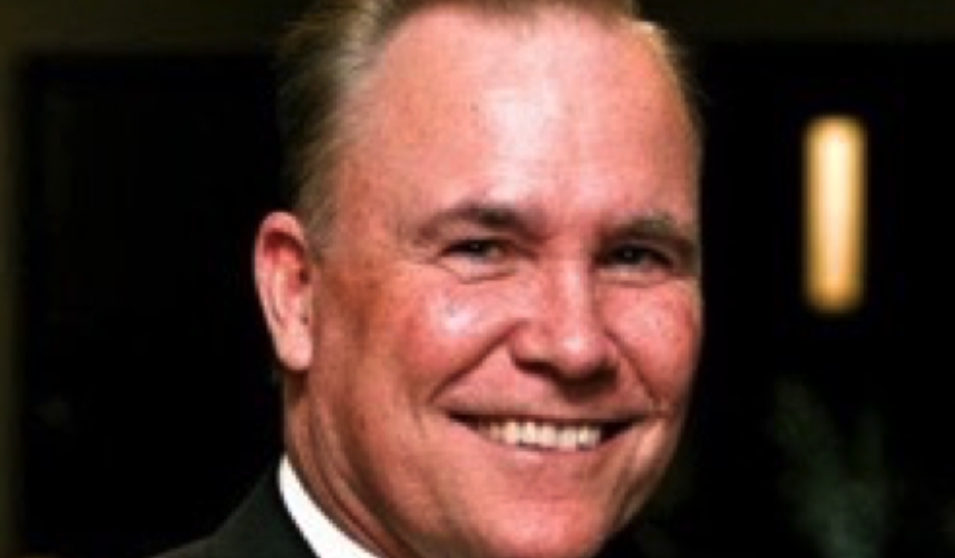 Ed Mills spent more than 45 years in public and higher education. His reflections are earnest and thoughtful. <\/p>"

Editor's Note: This is our second article on the importance of "wisdom" to rural schools and communities. Our first featured Missouri's Arthur Mallory. In addition, this piece, an interview, was written by Paul Theobald in conjunction with our partnership with Buena Vista University and Rural Lit R.A.L.L.Y. Thanks so much to Paul for his contributions to our new organization.

We believe wisdom is one of rural America's greatest assets, and we hope you will consider its potential in your school or community.

Ed Mills: Confessions of a Rural Schoolman, by Paul Theobald

Guy “Ed” Mills recently retired from a long career, more than 45 years, in both P-12 schools and higher education. Most of that time he worked in rural schools and colleges. Curiously, while adopting rural areas as his home for so many years, he didn’t come by them naturally. Mills was born and raised in urban Kansas City, the son of a career Kansas City firefighter. After college he taught in rural schools but very quickly moved into administration, first as a principal, and shortly thereafter, as a superintendent.

With the resolve that would come to define his professional persona, he led the fight to consolidate two Missouri schools—and he prevailed. But unlike most of his rural school administrator colleagues, he did not use the victory as a credential, as a way to demonstrate his prowess as a superintendent. Almost the opposite happened, in fact. The consolidation marked a turning point in his career. He left the countryside, went to the suburbs, and had the chance to participate in what he likes to call the “golden age” of school reform, working directly with Ted Sizer and Ernest Boyer to experiment with school improvement. The experience became an intellectual awakening for him, but as the reform era became a political target, Mills decided to leave school administration and went to teach at the college level. As a professor at South Dakota State University (SDSU), Mills participated in fund-raising and program-building in an effort to elevate the idea that schools and school policy ought to be a catalyst for community renewal, not community erosion.

Mills was kind enough to elaborate on his educational journey, and his reflections are instructive for those with a keen interest in rural schools and communities.

Paul: Talk about that consolidation experience in Missouri. Why did it come to represent a kind of turning point in your career?

Ed: During that time, working to pull the two schools together, I was taken by the incredible passion that so many people held for their small town, their school and its history, and their community. Many of those folks in the smaller community fought hard to keep the closure from happening, but in the final analysis, they didn’t have the votes to prevent it from happening. It was true enough that the closure of the school gave substantially greater financial strength to the school district. However, over the next few years, it became overwhelmingly clear that closing that small community school served as a sort of death knell for its town. The abandoned school was sold and became the site of a soon-to-fail business. The population of the community declined and businesses closed. The town fell into a general malaise, as it had lost the most vibrant source of energy – its school. It was a living tragedy, and this outcome had a very deep impact on my thinking as an educator. It was, in fact, the heart of the community that truly mattered.

Paul: What were some of the things you did at SDSU, and is it fair to characterize that work as, at some level, atonement for your role in creating a school-less community?

Ed: I’m not sure I was looking for atonement. I arrived at SDSU discouraged and disenchanted with the direction that K-12 was going. However, I loved returning to teaching. It was a wonderful gift at a perfect time in my career and life. I worked with many educators from small school districts, and it quickly became apparent that there was an almost apologetic mindset among many who worked in rural schools. Some were intent on getting to larger districts. I saw what was happening and realized the eventual impact on rural schools in the state if the apology dynamic went unchecked. So I infused all I’d learned about school reform into working with small schools and communities to reinvent themselves. I traveled across the state talking about Ted Sizer’s work and how those ideas would bring new energies to schools and then to their communities. I also worked with Native American graduate students in the southwest part of the state, and I brought those same ideas to them as future school leaders.

Paul: You went back home to Kansas City for a time. You were a successful faculty member at the University of Missouri—Kansas City, president of the Faculty Senate, etc., but you left to go back to rural places like Ft. Hays, KS, and Odessa, TX. Why?

Ed: I greatly enjoyed working at UMKC, and I had the opportunity to engage with educators from the urban area in which I grew up. It was going home, for a time. I did all I could to help future school leaders understand the value of community, and more so, the necessity of the neighborhood school to help hold community together. It was similar work to what I’d done in South Dakota, but on an urban neighborhood scale. However, I wasn’t content living in the city. I’ve always loved rural and less populated areas, and I was intent on returning. I stayed in Kansas City long enough to gain tenure and rank as full professor, and then moved on to more remote areas to work and live.

Paul: You once published a provocative little piece about an all-but-abandoned Kansas village. As I recall the article was entitled “Where’s Waldo,” in reference to Waldo, KS. Besides the opportunity for a clever title, what compelled you to write an article about a place that most researches would never give the time of day?

Ed: Waldo was a case in point. It was once a thriving rural community. When I first visited Waldo, I saw so much evidence of what school consolidation had done to the community that I felt compelled to write about it. The town still had its boundaries. It still had parts of what was once a fine set of school buildings. But, people were gone. Homes were abandoned and falling down. The downtown business district was vacant and former storefronts were collapsing. There were no people. The community had clearly suffered some long-term calamity and now was lost. A hint of what had happened was a rusting plaque on the wall of the still-standing gymnasium (then being used as an area auction site) that contained the names of a number of young men who went to fight in WWII, and did not return. My sense was that the plaque was evidence of some turning point for the community that had begun what was so evident all around the once-vibrant community.

Paul: The last stop on your long career was serving as president of Northwest Kansas Technical College, in Goodland, KS. Tell me about what you found there when you arrived, and how you left if six years later?

Ed: After twenty years in universities, Northwest Tech was a stunning career shift for me. I found a small two-year technical college that was struggling to survive. Colleagues at my former university questioned why I’d leave the university for what they saw as no good reason. The outgoing president at Northwest Tech chided me for coming to a college that would be closed in a year or two. General morale on campus was not high and it was clear that there was considerable worry about the future of the place. In addition, I found a campus that had a predominantly white, male, student body. Diversity wasn’t a part of institutional makeup.

On the other hand, I found a wonderful, dedicated, faculty and staff who were waiting to move forward. I found students who were much like I was when I entered college for the first time, so many years ago. Some don’t know their goal, but they know they need more education. Some already know exactly what they want to do and they go after it. Many of those young people were first generation college students, and many more were from lower socio-economic backgrounds. They had working skills and they had the rural work ethic that is so well known in western Kansas.

I was fortunate to have an outstanding Board who were intent on keeping the college going as long as the finances would permit, and the Board gave me free reign to invent and create – so I did. I used all that I had learned over the years about education, the nature of teaching, the immeasurable value of great teachers, all coupled with a deep appreciation for rural communities and rural people, to lead a rethinking of the college. We shifted away from the age-old ‘votec’ image and worked to develop a special kind of technical college – one that valued students; deliberately sought diversity; worked more diligently to provide finest possible skill training to prepare students for the workforce or four-year transfer; and we also brought new excitement from an array of athletic programs.

Faculty had deliberate conversations about what it means to be an ‘educated person,’ and they worked to continually improve their teaching. All the adults on campus were considered part of the education team, and all had an important role to play. With an engaged faculty and staff, we developed new academic programs, became the very first 2-year college in the state to embrace the Apple IPad. Over a six-year period of time, the college enjoyed dramatic growth in enrollment. I’m particularly proud of the diversity that came not only from Kansas, but from many other states and nations – bringing fresh and rich experiences not only to students, but also to the faculty, staff, and community The Kansas House of Representatives greeted me with a standing ovation due to our successes. Today, students continue to follow the college mantra – they work hard, they think smart, and they do the right thing. The college continues to prosper, and it remains a source of pride for people in rural western Kansas.

Paul: Most professors in technical colleges have likely never heard of place-based pedagogy—would that be fair to say? Not true at Northwest Tech. Can you give us an example of how place-based methods have been used there?

Ed: I like to think that’s changing. Northwest Tech is an amazing rural college that continually advances from out-of-the-box thinking. It’s one reason why students enjoy the college and persist to graduation in such great numbers. The professors at the college are proud of their embrace of “place based learning.” The concept is used to bring relevance and reality to a number of campus programs, but in particular to Crime Scene Investigation. The CSI program faculty began collaboration with a general education faculty member in American history to take students to the field to examine a real Indian Wars Era battlefield, just north of Goodland. The site has had no professional investigation and remains very pristine. It is perfect for the use of iPads, GPS, metal detectors, and other technical equipment often used by law enforcement. The best part of the experience, however, is helping students make wonderful connections with American history and present-day law enforcement techniques. 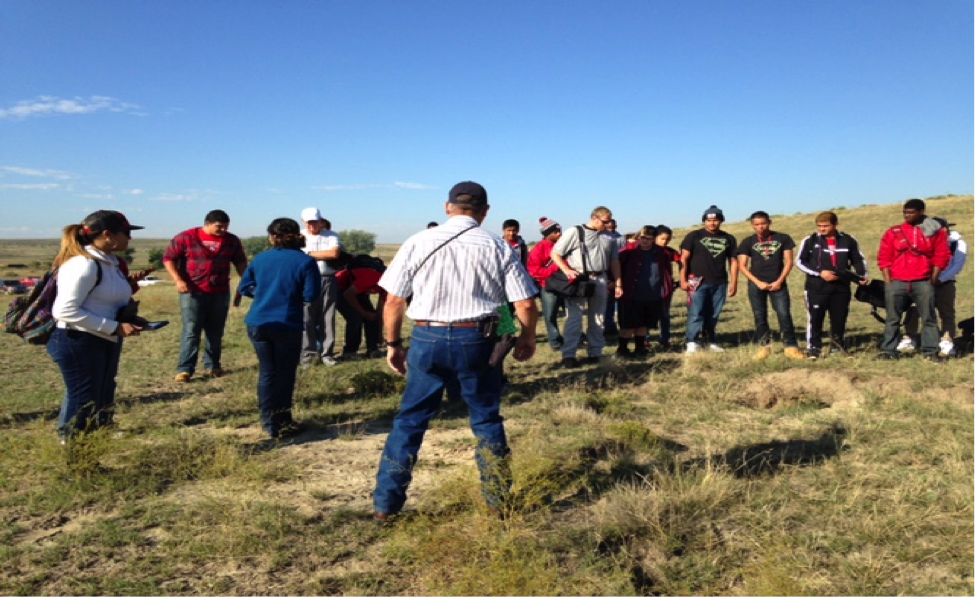 Above: Northwest Tech students work at the site of the Kidder Massacre, an 1867 skirmish near what is now Goodland, Kansas. 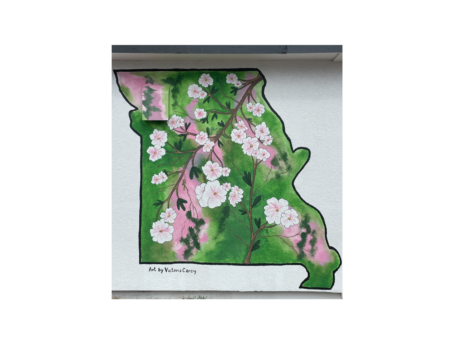 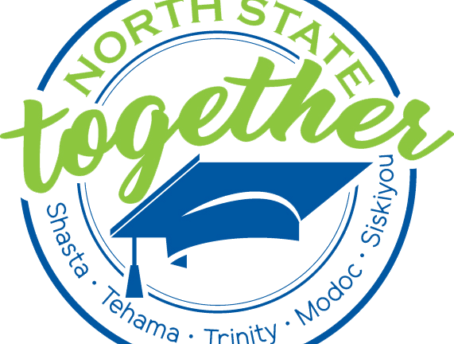