How Will You Positively Change Your Community?

The Power of Collaborative Philanthropy! 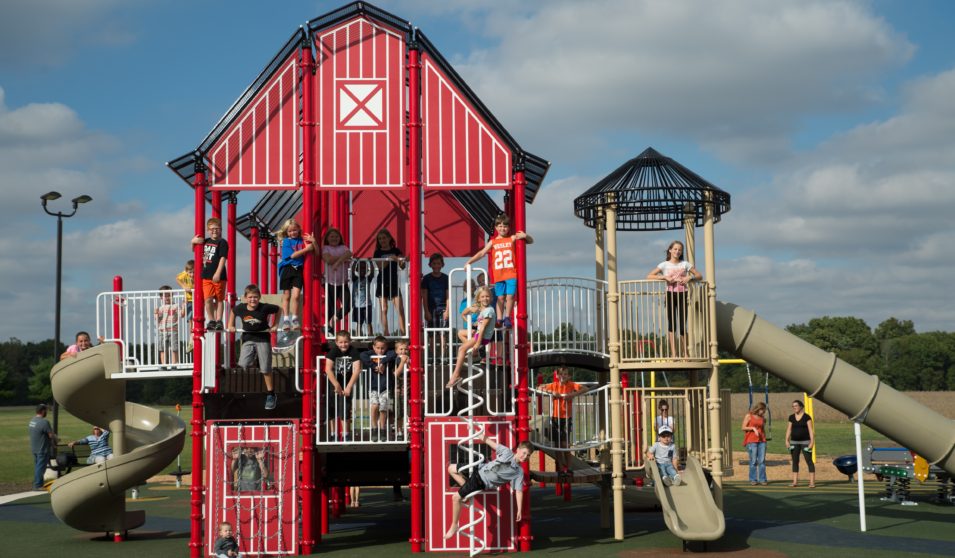 The residents of Williamsfield created a new playground with assistance from the Galesburg Community Foundation.<\/p>"

The Galesburg Community Foundation (GCF) anchors our Western Illinois Action Hub. GCF is in the midst of a regional philanthropy initiative that brings together small towns, public schools, and caring donors. We are convinced that public foundations can play an important role in rural community development, and this Williamsfield project is a perfect example.

Thanks to GCF for allowing the Rural Schools Collaborative to share their story, which appeared in their annual report.

Through a partnership with Galesburg Community Foundation, Williamsfield Parks Association and the Williamsfield FFA Alumni & Friends joined forces to research, fundraise and build a modern playground for their community. Located at Williamsfield’s 15-acre Doubet-Benjamin Park, it honors the community’s agricultural roots and improves the quality of life for families. The Playground Barn-Raising Project, which includes a colorful, two-story barnyard playground set, began a couple of years ago when community members decided there was a need to expand upon the dated playground equipment at the park.

“When my kids were little, we drove 25 miles roundtrip so they could play on a modern playground in a park setting,” says Joanie Stiers, a member of the Williamsfield FFA Alumni and Friends.

The Williamsfield Parks Association approached the Williamsfield FFA Alumni & Friends about raising funds to build something new and exciting for kids—a place where children, parents and grandparents could share in the joy of a slide, hang upside down on monkey bars, or swing as high as possible. And so the project was born.

It was with guidance and direction from the Community Foundation that the fundraising was done so seamlessly, Joanie says. “Williamsfield is

a town of 550 people and we knew that $150,000 was a substantial amount of money to raise,” she says. “The Community Foundation was just as excited as we were to reach our goals—and raise this new playground.”

The all-volunteer group’s fundraising goal was met within 15 months. “The team at Galesburg Community Foundation was a wealth of information on how to go about fundraising,” says Dustin Courson, who is on the Williamsfield Parks Association. “We didn’t have to reinvent the wheel.”

Joanie agrees. “We wanted to run a well-researched, professional fundraising campaign,” she says. “Having the Community Foundation manage the account added a level of credibility for people who were giving.”

The building of the barnyard equipment was memorable, Joanie adds, not only because it was exciting to watch it take shape but because so many people came out to help. More than 40 volunteers gathered over three days, many of them taking off from work or farming to lend a hand. “It’s hard to put into words the actual process,” she says. “There were moments you had to step back and watch the power of volunteerism—the power of community—in front of you. It’s been a journey.”

“They are helping to strengthen our rural communities through philanthropy and that’s really what this was,” she says. “We are all better because of their work.”

We want to thank Joshua D. Gibb, GCF president and CEO, for serving as the Rural Schools Collaborative board of director's chair. Learn more about Josh.