“I think that’s my favorite memory, just getting to be a part of these kids’ lives.” 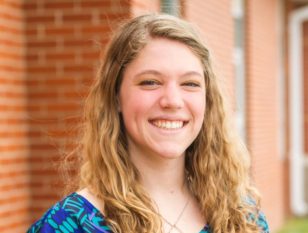 Since 2010, scores of young educators have graduated from the Ozarks Teacher Corps, with a rural school teacher-placement rate of better than 90 percent. This summer we will profile 13 of these teachers who are making a difference for rural Ozarks students and schools. These interviews were conducted and profiles written by English and Writing students at Drury University.

To see just how much Jami McConnell loves her job, you need look no further than her notebook of her favorite moments from class. In her words, the best moment from her first year of teaching, during the 2016-17 school year, was “all day, every day.” McConnell grew up right here in the Ozarks and attended a rural school of her own in Marshfield. After graduating from high school in 2012, McConnell attended Evangel University to study secondary education and English. Now you can find her teaching 8th grade at the Nixa Junior High.

Journey to the Classroom

McConnell decided she wanted to become a teacher during her sophomore year of high school thanks to one English teacher’s especially meaningful free-writing. Like most free-writing, this teacher would have the students take a few minutes to write whatever was on their minds, but unlike other teachers, she would respond to it at great length. “I kept all of it, I still have it, and she would write entire paragraphs back to me. Honestly, it was like some sort of counseling session,” McConnell says. It was through this experience that McConnell first realized how much she could help her students. “I realized you were directly able to make relationships with students and see them go from not really wanting to open up to you, to suddenly telling you so many things and being able to help them,” McConnell says.

Although McConnell first wanted to teach high school, she has found her home in the junior high. McConnell spent time in both a high school classroom and a middle school classroom for practicum and as she says, “I realized I was way more cut out to teach middle school. I just jam with these kids, they’re just so me.” McConnell says she has discovered that no matter what she is teaching, she can help her students understand bigger concepts outside of the reading. Not only is she teaching them about English, she is teaching them about life. McConnell chuckles. “I love that my students sometimes say that they can’t remember if they’re in English class or life skills class, and I love that because I’m using English concepts to teach them things that I want them to know for life,” she says.

The most challenging thing that McConnell has faced in her first year is being “on” all the time. “You can’t have an off moment when you’re teaching, you have to have it together all the time.” McConnell says. Some people might think she is crazy for teaching junior high, but McConnell says, “I love junior high, but people who teach kindergarten, kudos to them. I could not do that.” She also explains that her experience working in kid’s camps has helped her manage the classroom. It takes a very high energy level to maintain the attention of middle school students on a daily basis, but if anyone can do it, it is McConnell.

“A lot of people say that once you get into Nixa, you don’t leave, just because it’s such a good school system. I don’t feel like I could live by that quote,” McConnell says. McConnell loves traveling in addition to her love of rural schools, and this combination could very well mean she ends up in a smaller rural community in the future. McConnell loves Marshfield, but also can’t really see herself going there to teach anytime soon. Yet she also has trouble picturing herself working in a different small community. For right now, she is happy to be in Nixa, “I could not have asked for a better first year teaching job, it’s just been incredible. In the future, I’m so open to whatever. I’d definitely stick around here for a while.” Wherever she ends up, one thing is certain, “I can’t imagine myself going to a bigger district,” she says.

McConnell’s days at the Nixa Junior High are full of fun moments that she shares with her students. “They have me rolling on the floor laughing all the time, they’re just so funny and so energetic,” she says. Those moments surely line the pages of her memory notebook, but they are not her favorite. “My favorite memories are when the kids feel comfortable enough to open up to me,” she says. Just as her teacher was to her in high school, she is a counselor to her students. She is there for her students when they need her and they love her for it.

“I think that’s my favorite memory, just getting to be a part of these kids’ lives.”